If there’s one thing Lawrence Kasdan’s films have in common, it’s dogs. The most famous is “Edward” in The Accidental Tourist, who bites strangers and whimpers at ghosts in the basement. The most iconic is the wounded dog in Silverado whom the Kevin Kline character is said to have tended to, much to the amusement of his old gang buddies. The funniest is the German Shepherd in I Love You to Death who won’t let Kline make love to his mistress. The saddest is the German Shepherd in Dreamcatcher who dies after ingesting a creature from another world.

Dogs play an important role in Kasdan’s films, and one of the great disappointments of his most recent film, Darling Companion—his first film in 9 years, after Dreamcatcher flopped in 2003—is that it introduces us to an unforgettable dog in its opening sequences and then relegates it to the background, never to be seen again until [spoiler warning!] a tearful reunion with its human owners at the end. Imagine if Pinocchio had been told from Gepetto’s point of view; it’s touching to see the old man wandering out in the dark, calling out for his missing puppet, but at the end of the day we’re simply more interested in the adventures the wooden boy is having on his journey to return home. This is the essential problem with Darling Companion, and by making a lost-dog movie about the dog’s owners instead of the dog itself, Kasdan misses the real story.

Kasdan and his wife/co-writer Meg based the screenplay on an incident that occurred in their lives shortly after the release of Dreamcatcher, when their adopted dog “Mac” got lost in the Rockies only to be found three weeks later. The dog in Darling Companion is named Freeway (played by the adorable mutt Kasey), and makes such a lasting impression on us in the opening scenes that I wish the Kasdans had figured out a way to structure the film around Freeway’s adventures in the mountains, rather than around the old, tiresome humans who are searching in vain for him—when they’re not bickering with each other, quarreling with the locals or complaining about the trials of old age, that is.

That the Kasdans would prefer to stick to the humans’ point-of-view is understandable; they cannot speak for what their own lost dog experienced on his mountain journey, and can only speak for the pain they endured during his disappearance. But surely this is where the imagination of cinema could have stepped in and lent a hand? I shudder to think of the limp, uninspired film Kasdan’s old Raiders of the Lost Ark buddy Steven Spielberg might have come up with if his animal-movie masterpiece from last year, War Horse, had stuck only to Albert’s search for Joey, and not shown us any of the profound encounters experienced by Joey during his sensational wartime odyssey.

There is only one scene in Darling Companion in which Kasdan offers a trace of what might have been: an animated dream sequence in which Freeway is shown fleeing from red-eyed mountain coyotes before tumbling off a cliff. An “entirely unexplained and unnecessary” scene, claims Roger Ebert in his sorely-negative 1-star review. Actually, I found it to be one of the most inspired scenes in the film, and I wish there had been more scenes of this kind. What if Darling Companion had been half a movie about the humans’ search for Freeway, and half an animated movie told from Freeway’s point of view? Oh, what a grand opportunity Kasdan missed.

Ebert’s 1-star dismissal of Darling Companion is, more than anything, an indication that he considers it even worse than Kasdan’s last film, Dreamcatcher, to which Ebert awarded a mildly higher 1 ½ stars back in ’03. Other critics consider Darling Companion a slight return to form for the director. “As Kasdan dogs go, this is light-years better than Dreamcatcher,” writes critic Keith Uhlich. “It’s not a disaster like Kasdan’s last film, Dreamcatcher,” writes critic Lou Lumenick, who actually gave Dreamcatcher a positive review back in ’03. This is where I'm in the strange position of disagreeing with everyone. While I admire Darling Companion more than Ebert, I would also argue against Uhlich and Lumenick’s assertions that it’s a better film than Dreamcatcher. For all its faults, Dreamcatcher afforded Kasdan the rare privilege of tackling big, challenging themes about mankind’s place in the universe, and was further benefited from a strong performance by Damian Lewis as a psychic trapped inside his own subconscious mind. By comparison, Darling Companion is—in Kasdan’s own words—“meant to be light,” and despite having a cast of veteran actors who are clearly having a good time, none of them deliver a performance quite as compelling as Lewis’ in the last film, and the picture looks rather small and ordinary next to something as big and brave as Dreamcatcher.

The most successful performance in Darling Companion is by Diane Keaton, whom Kasdan has never worked with before, but who delivers what might be her best acting work since Something’s Gotta Give. She plays Beth Winter, who first found Freeway hiding out beneath snowy branches on the curb of a highway, and leads the charge to find him even while the rest of her family begrudgingly puts their weekly plans behind to join her in the search. “There’s a moment, very late in the film,” writes critic Ty Burr, “where Beth stands in a field calling out for Freeway one last time. Keaton’s voice goes hoarse and breaks, and our hearts break with it, so profoundly do we understand this woman’s need for this dog — the mute optimism and uncompromised love Beth used to believe in until life and family betrayed her.”

For me, the second-best performance in the film is delivered by Ayelet Zurer as Carmen, a descendant of gypsies who claims to begin having visions that Freeway is alive. When the film came out, several critics moaned that such a character is unrealistic in this type of story, sounding a note of “no, I’m not kidding!” in their reviews before revealing Carmen as a gypsy descendant (including this critic, this critic and this critic). And I’d be inclined to agree with them—except that the Kasdans did, in fact, consult the advice of a possible psychic when their own dog got lost. Personally, I found Carmen to be an interesting character and was delighted to see Zurer in the role; I instantly remembered her as Avner’s wife in Spielberg’s Munich (could this have been a casting referral from Kasdan’s old Raiders buddy?). The presence of a psychic in the film also allows for Kevin Kline, as Beth’s back-surgeon husband Joseph, to deliver the film’s funniest zingers, as when Carmen advises everyone to “go to bed” and Joseph muses, “What? Are you closing for the night?” Or, after Carmen claims to have seen a vision of Freeway in a frying pan of bacon: “I lost a pair of reading glasses. Maybe you could check the French toast.” 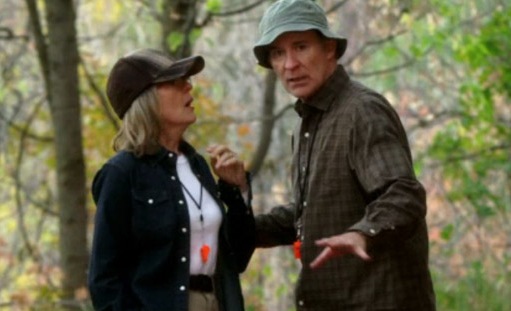 During these scenes, I laughed. At other times watching Darling Companion I felt like the jokes were tired and pathetic, all-too-obviously aimed for a generation older than mine. The film’s target audience is obviously a more geriatric crowd, which explains why the cast is composed predominantly of actors in their 60’s and beyond (Keaton, Kline, Richard Jenkins, Dianne Wiest, Sam Shepard). I was the youngest in my audience on the day I saw the film, and while the older audience members seemed to be enjoying it, I could never quite shake the feeling that Kasdan was underachieving. I longed for the more complex, more invigorating Kasdan of Body Heat, The Accidental Tourist and Grand Canyon, and didn’t mind that he was making a film about old age so much as a film so simple-minded in its exploration of the subject. “Gettin’ old really sucks, Joe,” grumbles Shepard as the local sheriff. Okay, so why couldn’t Kasdan have made a whole film centered on this issue, instead of merely glossing over it in a film about a missing dog?

On top of that, Kasdan’s direction is not up to par this time. In one scene, Joseph’s nephew, Bryan (Mark Duplass), and brother-in-law, Russell (Richard Jenkins), fight a slovenly dog breeder out in the woods, and I didn’t believe this scene for a minute; it’s played for obvious laughs, and one cannot help but reflect that in real life, Bryan and Russell would probably be shot by the breeder for harassing him on his land. In another scene, Joseph is on the phone with his newlywed daughter, Grace (Elisabeth Moss from Mad Men), while she’s on her honeymoon in Bora Bora, and Kasdan and his lifelong editor, Carol Littleton, ruin the moment by cutting back and forth from Joseph in the Rockies to Grace back in Bora Bora, who is blissfully ignorant of Freeway’s disappearance. The scene would have been more powerful if Kasdan had held the camera on Joseph the entire time, uneasily struggling to keep himself from telling his daughter the truth.

Kasdan has better luck directing a scene in which Joseph and Beth take a tumble down a rainy incline at nightfall, and Beth finds herself having to carefully mend Joseph’s dislocated shoulder; the camera holds on Keaton and Kline for the entire shot, and the scene works. The Kasdans also have fun with sexual politics in the screenplay. When Freeway is first found by Beth and her daughter at the beginning of the movie, Grace mutters, “This is one of those occasions when I wish I had a man I could call.” After Freeway gets lost, Joseph warns his wife that such pressures can be hard on a woman, and Beth shoots back, “Oh, tell me about being a woman.” Bryan, who is falling in love with Carmen but is skeptical about her psychic abilities, muses, “Beautiful women get away with a lot of shit.”

Some of these scenes work, others don’t, and eventually it all leads up to the finale, which is yet another reminder of what this movie needed more of: the dog. Kasdan rather nicely escalates the suspense in the film’s final scenes, when the Winters sadly board a plane back home and Beth looks out the window, surveying the mountain lands she and her family have trekked for the past three days. At this exact moment, I could hear audience members squealing under their breath, “She’s gonna SEE FREEWAY!” and suddenly I realized: wow, clichéd as it may be, I sure as hell wanted her to see Freeway. And yes, dear reader, once Freeway came bounding over those golden fields and into Beth’s arms, I could feel myself getting a little teary-eyed. The best thing to be said about Darling Companion is that even though we can see the happy ending coming a mile away, we’re happy to get one.
Posted by Adam Zanzie at 9:36 PM 2 comments: