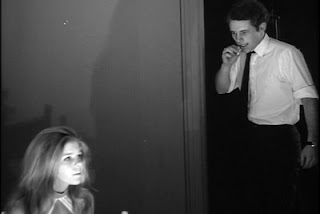 A box perched on a dolly is rolling down a hill in the cemetery. A woman watches as it comes to a complete stop and then tumbles to the ground, lying only a dozen feet away from her. The box is shaking. There is something alive inside. Because of what we as an audience have seen elsewhere in the film, we have an idea of what is trapped inside the box- and we yearn for the woman to hustle up, run over and open it. Instead, she hesitates before slowly advancing forward, preparing to open the box with caution. The suspense of waiting is unbearable.

Is the woman's course of action a rejection of common sense? Not at all. She is not as fortunate as the audience; she has not seen what we have seen. If she had, then she would have no need to approach the box with such caution and would have opened it immediately. But she has not, and she does not, and so she takes her time. Sure enough, ignorance proves bliss. In some ways, by not having an idea of what lies inside the box, the woman suddenly seems to be in a safer position than we are.

Murder a la Mod was Brian De Palma's first thriller and his first full-length feature film. History has always told us that De Palma's first films were his comedic collaborations with Robert De Niro (Greetings; The Wedding Party; Hi, Mom!), and that he didn't truly begin paying homage to Hitchcock until Sisters in 1973. If I haven't convinced readers otherwise, then I will consider this review a failure. I want nothing more than to make sure that De Palma's very first full-length feature stands alongside the rest of his gleeful, gorgeous, underappreciated gems. You want deranged serial killers chasing after vulnerable, half-naked babes? You got it. You want a voyeuristic camera that never seems to give anybody a moment's peace? Here it is. You want to see an incident from every point of view? It's all in Murder a la Mod. To put it simply, this is the film that started it all.

Like a select number of De Palma films afterward, Murder a la Mod is purely an exercise in style. De Palma doesn't worry about whether or not you follow the plot, whether or not you take the writing and acting seriously, or whether or not you even care at all what happens to the characters. We spend the 80-minute running time getting to know people like Christopher the porno filmmaker (Jared Martin); his dumb blonde actress Karen (Margo Norton), who is falling in love with him; her lady friend Tracy (Andra Akers), who will also play an important role in the events to follow; the nosy producer Max Wiley (Murder a la Mod producer Ken Burrows), who keeps hounding Christopher to have his movie finished on time; and you know what? All of them are cardboard. We couldn't care less about who gets killed, who survives, who gains anything, who loses, etc. The only amusing character in the entire film is a skinny young man named Otto, who, when he's not busy playing a fashion photographer in Christopher's latest movie, delights in playing "tricks" on various crew members. Armed with two types of icepicks- a "trick" pick and a "real" pick- his tactic is to use the first (harmless) type of pick on his victims and then smear them with ketchup blood. Whether or not he ever even uses the real pick is a mystery.

Alas, Otto is off the screen for most of the picture, so we are usually in the company of the naive Karen and the hot-tempered Christopher. Christopher doesn't enjoy spending every day ordering girls to take their clothes off in front of the camera. This is what he does for a living, and it is detracting from his peace of mind. He always tells his actresses (one of them is an instantly recognizable Jennifer Salt) that he's only making these type of movies because he "needs the money to divorce my wife"; he then has the actresses repeat this line before undressing. In some of the film's first scenes, we watch as the actresses struggle to expose their bodies to the camera, as Christopher impatiently eggs them on to hurry it up already. De Palma would later recycle these scenes for Greetings and Hi, Mom!, both in which Robert De Niro played the radical pornographer Jon subtlety trying to get unsuspecting women to undress for his camera. But at least Jon was a potentially nice dude; in Murder a la Mod, Christopher is sexually frustrated, hard to cooperate with, and abusive to his actresses and even towards Karen- who reveals to Tracy at one point that she and Christopher haven't even slept together yet, since he would prefer that work come first. Says Tracy: "He sounds like a combination between Gregory Peck and Albert Schweitzer".

But that's quite enough of the plot. I wouldn't dream of spoiling the film's surprises; and how Tracy ends up in conversation with a queer little old bank clerk (John Quinn) who has her handcuffed to a briefcase, I will leave for you to find out. Let's just say that between 3:32 PM and 3:42 PM, something atrocious happens to one of the characters, and De Palma then proceeds to show us the event not from one perspective, but four perspectives. This plot device is familiar to anyone who remembers Kurosawa's Rashomon (1950), but De Palma famously makes it his own in this film; he later recycled this device most famously in Snake Eyes (1998) and Femme Fatale (2002). One by one, we see different variations on the incident involving the rolling box, and later there is a battle of fists in the cemetery that, for some reason, reminded me of the axe duel in the dummy warehouse in Kubrick's Killer's Kiss (1955). Midway through the film, there is also a frenzied moment when De Palma's cameraman, Jack Harrell, races to keep up with a character who is rushing up the stairs, onto the roof, and then back down the stairs again- all in one take. We can't help, either, but take pleasure in watching Jared Martin, Margo Norton, Andra Akers and Ken Burrows as they helplessly try to turn Chris, Karen, Tracy and Max Wiley into believable characters without giving overly hammy performances.

And at the heart of it all we have the daffy, diabolical trickster Otto, played by none other than the Olivier of De Palma cinema: the great William Finley. It was thought for a long time that Finley owned the sole copy of Murder a la Mod right up until the year 2006, when the film was bought and redistributed onto DVD by- who else?- the cult classics home entertainment company Something Weird Video. The new DVD transfer is not entirely satisfying, as it lacks subtitles (it is difficult to hear what characters are saying in a few spots) and a Widescreen ratio, so therefore we end up getting only a fullscreen transfer and- I suspect- not the whole picture. Not that it's the end of the world; Murder a la Mod should be seen regardless of its current state. "It's everywhere! Why can't you see?" sings Finley in the film's title song. He's singing about the nature of the murder, of course, but I would like to think that he's also singing about the influence on De Palma's subsequent career by what resulted from Murder a la Mod. Everything that De Palma was, and is, came from this film. What's more, none of the characters exit the film without first being subjected to one of De Palma's cruel cosmic jokes. Even Otto makes a horrifying discovery of his own.
Posted by Adam Zanzie at 2:15 PM