Can it be true?

Paul Verhoeven was recently interviewed by MTV about his next project. Verhoeven told them,

"I am working on a movie now that is... situated in 1914. Basically, Indiana Jones-ish you could say, but also Hitchcockian... we are scripting it. It's an idea that exists already... from another medium, and so we are making it now into a film narrative."

Then Verhoeven was asked what medium he was scripting the project from. "A game, a video game".

Of course, he wouldn't say what the game was. "The writer of the video game has asked me to keep [the identity of the game] secret until he has a script."

If I had read this interview back when it was first conducted, I would have known right away which game it was, and who the writer of the game is. But SlashFilm writer Peter Sciretta and Screenrant writer Sandy Schaefer already beat me to it. DAMN! But that doesn't damper the great news. If what we are to believe is true, Jordan Mechner's The Last Express (1997), my favorite computer game of all time, is finally going to be getting a film adaptation.

I have been waiting for this for years. I first played The Last Express in late 2000, when I was in fourth grade. My parents had just returned from a cruise and had bought the game for me after they saw a quote on the cover box comparing the game to Hitchcock. I didn't officially beat the game until well into my middle school days (thanks, admittedly, to online walkthroughs; the game is so difficult!), but I immediately began daydreaming about possibilities for a film adaptation. Last year I even began foolishly writing my own 200-page screenplay adaptation, and sent it to Jordan Mechner (I don't expect it to fall in Verhoeven's hands, sadly).

But what IS The Last Express, you ask? It's an adventure game, set in Europe on the brink of World War I, onboard the Orient Express as it travels from Paris to Constantinople. The main character (the guy in the green coat, in the above picture) is Robert Cath, an American doctor who illegally boards the train without a ticket...

...only to find his American friend, Tyler Whitney, murdered inside his compartment.

I don't really want to go any further into the plot; knowing that this game may very well be turned into a movie pretty soon, I want everybody to go to the movie surprised. Let me just say that during the game, while playing Cath, you assume Whitney's identity in order to get to the bottom of his murder. And this involves communicating with the passengers and conductors, which- believe me- is a hell of a lot of fun. Who ever heard of an adventure game where acquiring knowledge is more important than fighting?

Granted, the game has its fight scenes (for example, Cath's knife fight with the Serbian terrorist Milos, as seen above), but such interludes only come with the genre. The game is part adventure and part international thriller mystery. Think Twin Peaks crossed with Sidney Lumet's Murder on the Orient Express and Hitchcock's The Lady Vanishes, with a little of Warren Beatty's Reds thrown in, and that may give you a general idea.

And who is Jordan Mechner, you ask? Jordan Mechner is the creator of the Prince of Persia franchise. Ever since my obsession with The Last Express, I've made it a point to remember Mechner's name, and whenever he's in the news, I usually stop to read or listen. I visit his website regularly, mostly to see what he's up to, and if he's got any more interesting games planned. Really, though, I'm a huge fan of two of his games: The Last Express and Prince of Persia: The Sands of Time. The latter is one of my favorite Nintendo Gamecube games, and which I played almost nonstop last summer. I haven't beaten it yet, but I intend to any day now.

This is also why I'm sort of looking forward to Mike Newell's film adaptation of Prince of Persia: The Sands of Time being released in late May. I don't expect it to be a masterpiece, but I plan to attend- because I'm a fan of the game, and also because Jordan Mechner is one of the co-writers of the screenplay. Regarding Mike Newell, I'm not as familiar with his work as I ought to be, although I admire what I've seen of Donnie Brasco on IFC. Furthermore, the casting decision of Jake Gyllenhaal as the Prince is excellent. I, personally, think he's a great actor (Zodiac, anyone?). 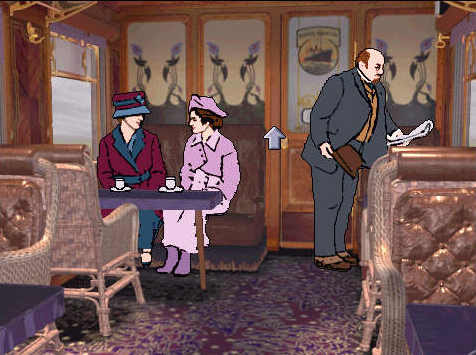 I mentioned my excitement that Mechner is helping write the Prince of Persia screenplay. I trust any of his contributions to that script will stand out- because the script that he and the late Tomi Pierce wrote for The Last Express (the game, I mean) is by far one of the greatest scripts ever written for a game, if not the best. Mechner and Pierce went through painstaking lengths to capture the dialogue, and the absolute realism, of the early 1900's and, specifically, the pre-war era. The internal conflicts of the game surrounding the slaughter in the Balkans, the Irish independence movement, and the Russian Revolution are nothing short of staggering.

Am I glad that Verhoeven may be the director of The Last Express? Yeah, I guess I am. If I'm not quite thrilled to the edge of my seat, it may be because my own personal choice would have been Brian De Palma (who really could use the income that this movie would no doubt make, considering that his post-1996 films- Snake Eyes, Mission to Mars, Femme Fatale, The Black Dahlia and my precious Redacted- have all been flops). I would think that the Hitchcockian material of The Last Express would have tipped off Mechner to realize that this story is right up De Palma's ally.

Still, Verhoeven is probably as good as it gets. Not that I'm complaining- not whatsoever. I love Total Recall. However, I haven't seen any of Verhoeven's other films; I've seen bits and pieces of Robocop, Basic Instinct and Starship Troopers, but never the films in their entirety. As for Showgirls, I would check it out were it not for the fact that Blockbuster Online evidently refuses to rent it out. So, this means I've got some serious jamming to do with my familiarity with Verhoeven. I do trust that he will do The Last Express justice; after all, if he could evoke the WWII era romantically with Black Book (which, again, I've never seen), he should be able to reinvent the World War I era of this game just fine.

Maybe I should hold my horses, though. Fact is, we don't even know if this project is going to be a reality; Verhoeven didn't reveal the title of the game he is adapting. I find it hard to believe it could be anything else, though. For those of you who are interested in playing The Last Express (and I HIGHLY RECOMMEND IT!!!!!), you can download the game's demo here. For those of you who aren't gamers, however, you can go to YouTube and watch the game's chronological clips- this I recommend even more, since it's a faster way of getting down the game's storyline (and why I love it as much as I do).

Anyway, I'm done rambling now. I don't usually talk about games on this site, but this was one occasion when I absolutely had to. Like I said, I have always dreamed of The Last Express becoming a movie. The game itself, unfortunately, was a financial disaster, and without the continued success of the Prince of Persia series it's likely that Jordan Mechner's career would have been over. Certainly the game's failure canceled out all chances of the story being turned into a movie. Ironic, considering that it's a very cinematic game.

With luck, a Last Express movie is what Verhoeven and Mechner have in store for us. At last, this great story is going to be released all around the world.

And remember, people- you heard about it HERE, first! :)
Posted by Adam Zanzie at 4:36 PM