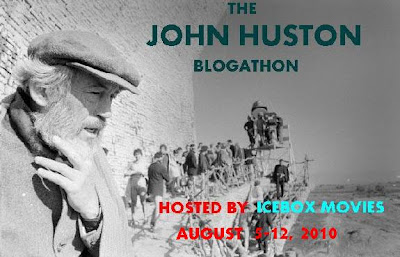 Having not even been active in the blogosphere for a whole year yet, I feel sort of unorthodox doing this, but I would like to announce my plans for a John Huston Blog-a-thon to be launched right here, at Icebox Movies--from August 5 to August 12.

I've only told this to a few people on a few blogs, but after some years of pondering I think Huston may very well be my favorite American filmmaker. It's strange for me to say a thing like that, seeing as how I hadn't even heard of him until my late middle school years, and he certainly was not the director who first inspired my love of the cinema (that would be the modern whiz kids like Scorsese, Coppola, Spielberg and De Palma). And the first Huston film that I ever saw was Annie (1982), which is probably the first Huston movie that EVERYBODY these days probably sees in their lifetime... even though it's one of his worst films!

But after I saw The Maltese Falcon and The Man Who Would Be King in the summer after 8th grade, something happened to me. I wanted to begin seeing more of his films. I was about to go into high school, and I realized that if I ever wanted to starting taking a career in film seriously someday, I had to familiarize myself with classic cinema more. I had a little help on the side from David Lean and Robert Mulligan, of course, but if I remember correctly, Huston was the first classic American filmmaker whom I paid strict attention to (excepting Hitchcock--he was British!). It's because of Huston that I got into the films of Ford, Hawks, Welles, Griffith and so many other American masters.

Every Huston film I see feels better than the last. I've been watching more and more of his flicks this year, for some reason. And yet, some of you will ask: why Huston? What's so special about him? He has never been regarded as much of an auteur: Andrew Sarris and Molly Haskell don't care much for him, nor did Truffaut and Godard. His career is not dominated by one single auteristic theme, unless you could try to make a case for "male angst". Some of his great pictures have nothing in common with his other great pictures. How does The Treasure of the Sierra Madre align at all with Prizzi's Honor? Is there a lick of Beat the Devil in Fat City? Hell if I know.

I invite everybody and anybody to submit contributions to the blog-a-thon. Even if you don't feel like writing anything, though, go ahead and still participate: you may learn a thing or two about Huston, or maybe you'll teach others. Don't feel like you're obliged to gush over any loving feelings towards the man, either; if you've got a bone to pick with a Huston film or two, go ahead and rip it to shreds. I, for one, am about as far from a Huston expert as one can get and am hoping to learn even more about his filmmaking than I already know. And if you dislike Huston, go on a rant: I'm all ears. I've never quite understood the concrete criticisms of him and would enjoy a better understanding of them.

Huston died in 1987 at the age of 81. This year, he would have been 104. So, come celebrate his late birthday here at Icebox Movies in early August. I can't wait--it's going to be a lot of fun writing about a filmmaker who doesn't get much due. If you wouldn't mind, please spread the word to other blogs as well--my blog doesn't have very many folllowers, and I would love to see participation from bloggers I've never met.

The mission of the blog-a-thon will be to decide whether or not Huston should be judged as an auteur, or just as a studio director who left us with some wonderful films. But as his version of Gandalf once said,

See you in August, everybody.
Posted by Adam Zanzie at 5:47 PM