The Great Mouse Detective (1986) is not a Disney movie about good vs. evil but, rather, a Disney movie about two, fiercely-opposed egos. On the one hand we have charming, energetic Basil of Baker Street: lives under Sherlock Holmes’ floorboards, cross-dresses in Japanese fat suits, plays his violin whenever miserable. On the other hand, we’ve got menacing, charismatic Professor Ratigan: lives in the waterfront sewers, dresses in kingly get-ups, despises it when people call him a “rat”. They’ve both spent their entire professional lives trying to hunt each other down. Nothing is more important to them than the long-desired satisfaction that comes with a superior mind.

Disney specialized in movies like The Great Mouse Detective in the 30’s, 40’s and 50’s, back when the studio used to believe in making films that stressed themes of intelligence and character study. Then the 60’s and 70’s gave us a series of movies that were significantly less-inspired (101 Dalmatians; The Sword in the Stone; The Jungle Book; The Aristocats; The Many Adventures of Winnie the Pooh; The Rescuers), and it was as if Walt Disney’s long-term artistic promises had all but evaporated. Had it not been for Disney’s short-lived nirvana in the 80’s and early 90’s, it seems likely that the studio would have been gone for good. Thus, The Great Mouse Detective ranks with The Fox and the Hound (1982) and Beauty and the Beast (1991) as one of the last truly excellent 2-D films released by Disney—before the studio grew into the corporate monster that it is today. The movies have gotten cheaper in quality again, and the concepts are no longer fresh. Without the beneficial support of Pixar, we would probably forget that Disney still plays a major role in our lives as moviegoers.

The Great Mouse Detective is interesting, then, in that it’s a Disney movie primarily concerned with character instead of story. The movie came out before I was born, and yet having watched the 1991 VHS tape ever since my childhood, I’ve come to develop a strong familiarity with the film’s heroes and villains. The plot is a basic story of kidnapping and government siege, but the characters in The Great Mouse Detective keep me engaged no matter how many times I see it, and I’ve seen it nearly a dozen times. This is why I’ve even grown to prefer it to a more popular contemporary classic like The Lion King (1994), in which the villain was always more intriguing than the hero. In The Great Mouse Detective, we get an intriguing hero and an intriguing villain, ensuring that we’ll be pleased with the final results no matter who wins in the end (even when, this being a kids’ movie, we all know who’s going to win).

The movie provides, in Basil of Baker Street (Barrie Ingham) and Professor Ratigan (Vincent Price), two of the most perfect foils ever written into a Disney feature. Like Sherlock Holmes and his arch-nemesis Moriarty, Basil and Ratigan believe not in the power of brawn but in the power of wisdom: neither one could possibly stand the humiliation of being outsmarted by the other. In private, Ratigan weeps over Basil’s intrusions into his affairs, and his henchmen weep with him. And Basil is so broken by his consistent failures to bring Ratigan to justice that a failed bullet test is enough to damper his spirits for the rest of the day. In one of those rare Disney movies where everybody drinks beer and champagne, and where female mice strippers heat up the nightlife with variations of Melissa Manchester’s “Let Me Be Good to You”, Basil and Ratigan—mortal sinners that they are—share only one other thing in common: they’re both heavy chain-smokers. Nicotine helps them concentrate. One has to wonder: are they smoking rat poison? But never mind.

They know each other’s weak points. “Ratigan,” chuckles Basil, in a face-to-face encounter, “no one can have a higher opinion of you than I have. And I think you’re a slimy, contemptible sewer rat!” He is aware of how sensitive Ratigan is to being called a rat—even though that’s what he is, after all—and Ratigan is particularly aggravated when Basil calls him a rat in front of an entire audience of London citizens. But Ratigan has some tricks of his own. When Basil accidentally abandons common sense and walks into one of Ratigan’s traps, he is utterly devastated. And when Basil is subjected to one of Ratigan’s absurd, James Bond-style execution ceremonies—in which a variety of lethal weapons are timed to strike Basil’s body all at once—he is too ashamed to be terrified. He simply gives up. To him, death would be the only fitting medicine for the stupidity he has suffered by walking into Ratigan’s painfully obvious trap.

They are supported by an unforgettable team of supporting characters, all of them lovable. There’s little Olivia Flaversham (Susanne Pollatschek), who comes to Basil for help after Ratigan has her father (Alan Young) kidnapped; a running joke in the film is that Basil can never get her name right, calling her things like “Flanchester” and “Flangerhanger”. She is eventually intercepted by Ratigan’s right hand, Fidget (Candy Candido), a peg-legged, broken-winged bat who makes two frightening appearances in the film—one in the opening scene, one in an ominous sequence set in a toy shop—but is otherwise pathetic and hopelessly unorthodox: he would probably be a nervous wreck if Ratigan weren’t sending him on missions with a helpful checklist. And then there’s Dr. Dawson (Val Bettin), who has just returned from service in Afghanistan and is taken by surprise when Basil not only determines, correctly, his origins and occupation, but asks him to come along and help him solve the case. 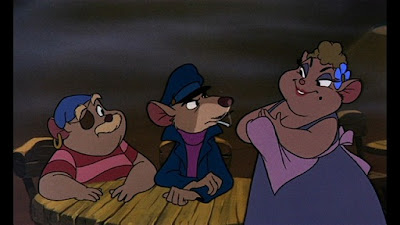 The character of Basil, adapted from Eve Titus’ children’s book Basil of Baker Street, is modeled—in part—on the late Basil Rathbone, who was most famous for playing Sherlock Holmes in the 1940’s and is paid tribute to in this film. One scene has Basil wearing a blue sailor’s disguise in a bar; a similar disguise was worn by Rathbone’s Holmes in Sherlock Holmes and the Secret Weapon (1943). In another scene, Rathbone himself makes a posthumous cameo as the voice of Holmes during a scene in which Basil listens, from behind the walls, to Holmes’ investigation of a “frightfully dull” German concert; the cameo was made possible when the filmmakers ripped Rathbone’s voice tracks from a 1966 radio broadcast. Basil is voiced in the film by Barrie Ingham, who had a small role in Fred Zinnemann’s The Day of the Jackal (1973) but has a lot of fun here, and makes the character into a most delightful Disney hero.

Vincent Price’s work as Ratigan is sublime. When you consider that the actor had long desired to work on a quality animated film—Richard Williams had already wasted his voice talents for the role of Zigzag in Arabian Knight, which took 30 years to finally formulate into the abysmal The Thief and the Cobbler in 1995—the timing couldn’t have been better. Listen to his devilish voiceover work as Ratigan, as in the scene in which he subjects a drunken rodent to capital punishment in the jaws of his pet cat, Felicia. Or when he triumphantly declares, “I’ve WON!” when it seems as though he’s outsmarted Basil at last. Price, who would have turned 100 this year, once said that Ratigan was his favorite role.

The film makes some notable references to other Disney classics. Dumbo makes a cameo as a bubble-blowing toy. Bill the Lizard, the ill-fated chimney sweeper from Alice in Wonderland (1951), appears here as one of Ratigan’s henchmen; it is anyone’s guess why he has turned to a life of crime after being catapulted out of Wonderland in the last film (to quote critic Martin Goodman, “One would think that there were plenty of chimneys to sweep in 1897 London!”). Even London itself is presented with the same, Disney-style romanticism it had in Peter Pan (1953), 101 Dalmatians (1961) and Mary Poppins (1964), since, after all, the Brits have always shared an impenetrable Disney love with their Yankee neighbors on the other side of the ocean. 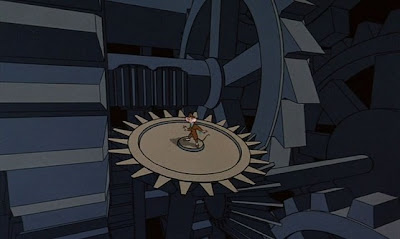 The final chase sequence is kind of magnificent. Ratigan and Fidget ride away, with Olivia as hostage, on a mini-blimp that trudges through London’s night skies, and I remember, as a young child, being amazed at how Basil, Dawson and Flaversham are able to pursue them—on a hot air balloon made out of books, balloons, and a Union Jack stolen from Buckingham Palace. Even more impressive is the climatic duel between Basil and Ratigan inside Big Ben, where they find themselves nearly crushed by the gears and chains bearing down on them inside the clock’s face; this was the first time CGI had ever been used in a feature-length animated film. In the end, though, it all comes down to brains over brawn. Ratigan may be strong enough to knock Basil off the clock’s hands. But only Basil is smart enough to mentally remember the moment when the clock strikes midnight, and the difference that moment will make.

It is but one great instance in a Disney movie that contains several underrated instances of emotional power. When Ratigan brings Olivia and her father back together again—only for him to cruelly separate them again—that hurts like nothing else. When Dawson is brought to tears over his failure to protect Olivia from danger, Basil stops ridiculing him, comforts him and assures him, “We’ll get her back.” Even when the case is solved and Dawson prepares to leave Baker Street for good, we are overjoyed when Basil finds a way to convince him to stay. They are immortal characters, and we love them. 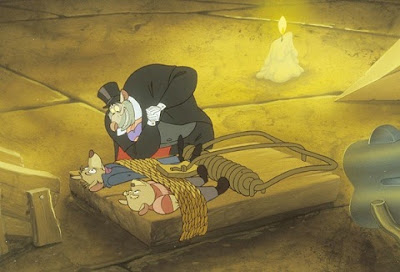 The Great Mouse Detective came out the same year as Don Bluth’s An American Tail (1986), another animated film in which a mouse was the hero. If An American Tail seems like the better movie today, that’s probably because it was an immensely personal work; Bluth, a former Disney employee, had structured it, deliberately, as a critical response to Disney’s more conservative way of working. By contrast, The Great Mouse Detective was a collaborative effort worked on by 4 directors (Ron Clements, John Musker, Dave Michener, Burny Mattinson) and, thus, lacks An American Tail's singular vision. But 25 years after its release, The Great Mouse Detective continues to endure, perhaps because the fight for intelligence waged between Basil and Ratigan has kept it so remarkably alive. When you can communicate such a fascinating character conflict to a level so that kids will understand, it's more than just a kids' movie.

Submitted to The House Next Door's Summer of '86 series.
Posted by Adam Zanzie at 4:00 PM