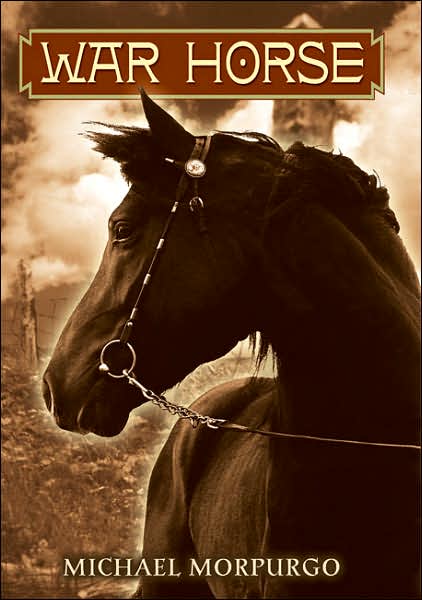 The book begins with a notice by Michael Morpurgo describing a "dusty painting of a horse" he once saw in an English village schoolhouse. Across the bottom of the bronze frame at the bottom of the painting, according to Morpurgo, reads the inscription, "Joey. Painted by Captain James Nicholls, Autumn 1914."

War Horse opens with a bit of narration by Joey the horse, at a time when he was barely six months old: "My earliest memories are a confusion of hilly fields and dark, damp stables, and rats that scampered along the beams above my head. But I remember well enough the day of the horse sale. The terror of it stayed with me all my life."

Joey remembers being separated from his mother at an auction ("I screamed for my mother and heard her reply echoing in the far distance") to a mean, alcoholic old "owner" who lumps him in with an older horse named Zoey. The owner's 13-year old son, Albert Narracott, takes a liking to Joey despite his mother's insistence that he leave him alone.

I knew then that I had found a friend for life, that there was an instinctive and imemdiate bond of trust and affection between us.

Albert raises Joey over a period of winters and summers. "His whistle," claims Joey, "imitated the stuttering call of an owl -- it was a call I never refused and I would never forget." Albert's father is sometimes kind, but is often nasty, especially when drunk. Because of this, Albert begins putting Joey in the stables with Zoey to ensure that he is kept safe during his father's drunken rages.

One night, Albert's father makes a bet with some other farmers that he can have Joey "pulling a plow before the end of the week." Joey resists, kicking Albert's father and accidentally injuring him. He considers killing Joey for this, but Albert, now 15 and taller than his father, protests. His father than warns him that he'll sell Joey if he can't get him to pull a plow. Albert inists that he can train Joey to pull a plow as expected.

Eventually, Joey pulls through, and Albert's father wins his bet. Albert's mother tells him that a war is coming.

"If it comes to that, you'd make a good war horse yourself, wouldn't you you, if you ride as well as you pull, and I know you will. We'd make quite a pair. God help the Germans if they ever have to fight the two of us."

And then war is declared. Albert assumes that it will "be over in a few months", but quite the contrary.

By now, there is "a growing tension on the farm", and Albert is getting in more and more arguments with his mother and father. The mother insists that his father only drinks so much because he worries about the farm mortgage, and because he's getting older. "Albert and his father scarcely spoke to each other on those days," narrates Joey, "and Albert's mother was used more and more by both as a go-between, as a negotiator."

Then, on a Wednsday morning, Albert is asked to return a saddleback boar to the valley. He agrees only if he's allowed to take Joey out in the evening to train him for hunting season, which his father responds to with silence. After Albert leaves, his father uses it as an opportunity to go behind Albert's back.

Albert's father leads Joey into the village, baiting him by taking Zoey along, too. Albert's father then sells Joey to Captain Nicholls of the British army for 40 pounds.

Joey narrates, "I had just about give up all hope, when I saw Albert running toward me through the crowd, his face red with exertion. The band had stopped playing , and the entire village looked on as he came up to me and put his arms around my neck." Realizing he cannot stop his father from seeling Joey, Albert begs Captain Nicholls to let him ride Joey in the war, but the captain refuses. Joey is too young for the war -- to enlist, you have to be seventeen.

Captain Nicholls apologizes for not being able to help, reminding Albert that his father needs the money in order to run the family farm. But he also urges Albert to come and join the cavalry when he's older, saying he can use his name as a reference.

"Your horse belongs to the army now, and you're too young to join up. Don't you worry -- we'll take good care of him. I'll take personal care of him, and that's a promise."

Joey is trained by the army to be a cavalry mount, and doesn't like it one bit. "Gone was the gentle snaffle bit that I was so used to," he complains, "and in its place was an uncomfortable, cumbersome barbed bit that pinched the corners of my mouth and infuriated me beyond belief."

He specially dislikes his rider, Corporal Samuel Perkins, sort of a macho show-off who is feared by the other soldiers; although he doesn't beat Joey or lose his temper with him, he is not above whipping him to keep him going. Joey claims that his only "consolation" during this period is Captain Nicholls, who has held to his promise to take good care of him, and has even started sketching Joey as a hobby.

He tells Joey that he's preparing a portrait of him: "I can't take it with me to France -- there would be no point, right? So I'm going to send it off to your friend Albert, just so that he'll know that I meant what I said when I promised I would look after you." At one point, the captain confesses to Joey that he's pessimistic about the outcome of the war, and that he and a person named Jamie are the only ones who think the Germans might actually win.

Corporal Perkins gets into a debate with the captain over the merits of Joey complaining that "he has to learn and obey instantly and instinctively. You don't want a prima donna under you when the bullets start flying." The captain encourages the corporal to treat Joey better, reminding him that "a horse may carry you through, Corporal, but he can't do your fighting for you." The captain also tells him to feed Joey more. From then on, the corporal is less harsh towards Joey. The first battle takes place on Salisbury Plain.

I remember mostly the heat and the flies that day because there were hours of standing about in the sun waiting for things to happen. Then, with the evening sun spreading and dying along the flat horizon, the entire regiment lined up in echelon for the charge, and the climax of our last maneuvers.

During the battle, Captain Nicholls rides Joey alongside his friend Captain Jamie Stewart on a black stallion. They easily overtake the "enemy" position ("enemy" is put in quotes by Joey himself, perhaps ironically), and Nicholls proudly tells Stewart that the conflict could not have been won without Joey's great agility. Stewart counters with insistence that his black stallion, Topthorn, "is the finest mount in this regiment or any other." If Joey is the faster horse, he says, then Topthorn has more stamina.
Posted by Adam Zanzie at 10:00 AM