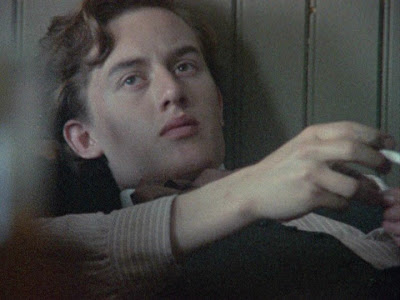 Peter Watkins' Edvard Munch is a bitter, difficult, brutally honest portrait of an artist who had a life and enjoyed liberty, but in the pursuit of happiness reaped nothing except mental and personal instability and misery. Entrapped in the middle of a Norwegian society that was traditional and unforgiving, he hung out in clubs with intellectual anarchists, experimented with contemporary art mediums, and sought sanctuary in whorehouses as a last resort for his sexual frustrations. By the age of 30, he was still without a wife, still moving like a parasite from one gallery to the next, having each time to endure the stinging criticism of those who did not appreciate his risky, pessimistic subject matter. Through it all, he was haunted by the memory of a married housewife: the provocative Mrs. Heiberg, who temporarily fulfilled his amorous longings--before disposing of him after his eerie demeanor became impossible to tolerate. Ultimately, Edvard Munch was a brilliant artist who left behind dozens of wonderful works of art. His life, however, does not inspire envy.

Watkins has been making movies since 1956, but his work is new to me. He specializes in the "docudrama", the type of film that treats a fictional story as if it is real and features characters who are interviewed by an anonymous inquirer sitting on the other side of the camera. The War Game (1965), Punishment Park (1971) and Resan (1987) have all gone unseen by me, but I fully intend to begin analyzing more of his work. Watkins, it seems, has not made a film since La Commune in 2000, and has now instead taken to online critiques of the media, which has led to numerous scathing essays posted by him on his website- one of which is literally one hundred pages long. As far as English cinema goes, one might suggest that Mike Leigh has picked up where Watkins left off.

In his writings, Watkins claims that "those who were once able to work critically within the media have been marginalized", so it can be assumed that his relationship with the media is like that of Vanessa Redgrave's relationship with Zionism: heated. But it would be a joy to see him return to filmmaking. Knowing that it was Godard who once said that the best way to criticize one movie is to make another movie, it might do Watkins a bit of good to make a movie exorcising his qualms with the media. That he succeeded in making an Edvard Munch biopic to help exorcise his qualms with the political backlash that assailed him following the release of Punishment Park is no exception.

A lesser filmmaker would have thought to tell Munch's complete story in one big compaction, but Watkins wisely focuses on the earlier, more important years, when Munch was in the twilight of producing works that were obscure, potent and controversial. Supplements on the Special Edition DVD hint that Munch's later years were happier and that his work grew more optimistic, but Watkins pays no attention to them--he doesn't even mention Munch's date of death (1944), which occurred at a time when the Nazis had almost completely overtaken Norway. To be honest, I am not sure if Watkins' refusal to display these facts for modern audiences works for or against the movie's effect.

Munch is played by Geir Westby, in a performance that is stoic for the most of the picture; as a visual artist, Munch's purpose in life was to observe, not to orate, and so Westby's lines of dialogue are reduced to a minimum. In light of how Westby is filmed, Watkins takes a uniquely European approach, alternating between immense close-ups of Westby (a la Dreyer) and more ordinary shots in which he is filmed from the waist up (a la Bresson). It allows Munch as a character to become less static and more flexible; one minute his facial expressions are worthy of camera attention, the next minute he's a wandering clone of his society like everyone else.

Munch had a bad childhood, ruled by a stern father (Johan Halsbog), who subjected his children to a strict religious upbringing and flew into angry resentment when Munch began rejecting his family's values. Munch's younger brother, Peter Andreas (Gunnar Skjetne), is the exact opposite: he studies law and keeps his faith, and, upon being interviewed by the camera's inquirer about whether or not life is fair, he responds that he does not believe it fair to judge God so harshly. But eventually, the religious faith of Munch's family members will prove to be powerless after all: his sisters will all die unmarried, Peter will die unhappily married to a twelve-year old girl, and Munch's father will perish into oblivion- with the troubled relationship between him and his son left unsettled.

That, and Munch's Expressionist art is trashed by the Norwegian critics. Throughout the film, Watkins keeps returning to the searing image of a young Munch inflicted with tuberculosis, and Watkins dares not spare the audience any pain in having to watch as blood overflows from the young Munch's mouth. He nearly died from it, and the disease was to claim the lives of both his mother and one of his sisters- inspiring his first major work, The Sick Child. It was laughed at by spectators who knew not what to make of the blurry faces and obscure quality, and a friend reportedly told Munch, "it is a piece of shit". Tuberculosis inspired another painting, Death in the Sickroom, in which characters with hyperbolic faces look on while a blank-faced figure, a stand-in for Munch, turns away from the perspective. These were drawn at a time when Munch was smoking and drinking heavily, his health detracting, while his paintings were rejected not just in Norway, but even in Germany, where the conservatives lambasted his work as "anarchistic smears". The liberals did not so much defend Munch's art as they did defend his right to book showings in the galleries.

Important figures pass in and out of Munch's adventures. In the film's beginning scenes, we see him defiantly hanging out at an underground intellectual's club headed by the charismatic anarchist Hans Jaeger (Asle Raaen), who spreads the words of Marx and Darwin and promotes suicide as the most effective form of rebellion. When Munch complains about the dinner table quarrels he has with his father every week, Jaeger suggests that Munch ought to go home and shoot his father dead. Jaeger himself will have to flee Norway after he publishes an anti-government book and even goes so far as to send it out to neighboring countries, leaving Munch without a mentor and without a friend. Then there is the free-spirited Dagny Juell (Iselin von Hanno Bast), a barfly who poses nude for what is arguably (in my opinion) Munch's most erotic work, The Madonna, depicting a haloed female as seen from the eyes of her partner during intercourse; we are told that Juell herself will later be murdered by a Russian lover.

Munch's other works seems to come naturally. His most famous painting, The Shriek (aka The Scream), is born out of "panic dread in what was apparently social progress", with Munch secretly inscribing the words "could only have been painted by a madman" in the blood-red sky. The Vampire, we learn, was originally not supposed to be about a vampire at all, but was a simple depiction of a woman kissing a weak man's neck; Munch did not protest, however, when the radicals insisted that it represented something of a darker nature.

Torturing Munch's fantasies and deepest regrets is the memory of the woman who may have been the soul mate who got away. Mrs. Heiberg (Gro Fraas) meets Munch through Hans Jaeger, and, for some strange reason, takes an instant liking to him- the first ninety minutes of Edvard Munch are devoted mostly to this affair. When Munch first spends time alone with her, he is noticeably nervous; he kisses the back of her neck, and then asks if that was the right thing to do. He is careful not to make any sudden advances on her. They have sex, but Watkins doesn't make their relationship feel sexy in the least, and we sense that Munch is desperately trying to release a carnal side of himself that might not even exist.

Before long, Munch realizes that he is only one of many male lovers that Mrs. Heiberg has wrapped around her finger, and pretty soon he is stalking her--whining about how she passes him by on the streets every day with another man at her arm. In her own docudrama interview, Mrs. Heiberg complains to the camera about how it is commonplace for extramarital affairs to be held by men, but not by women. Munch finds the break-up tough to cope with; there is a drawn-out scene in which he checks in at a whorehouse for the night but awkwardly waits for the hooker to make the first move. He and Mrs. Heiberg would never meet again.

It is, yes, a remarkable film. It pulses and echoes with the poetic love of the people who made it. There is brief hope at the end when we learn that although Munch's career in painting may be coming to an end, his new career in engraving is just beginning. That may be true, but how can it ever erase those painful preceding years, when he sweated and almost died over a profession that would have driven others to suicide? The performance by Westby asks us to care about a cold, unstable genius, and it is no easy task. But we do. And sometimes, the most gifted geniuses in this world live sad lives. Edvard Munch lived a sad life, and Peter Watkins knows it.
Posted by Adam Zanzie at 1:19 AM